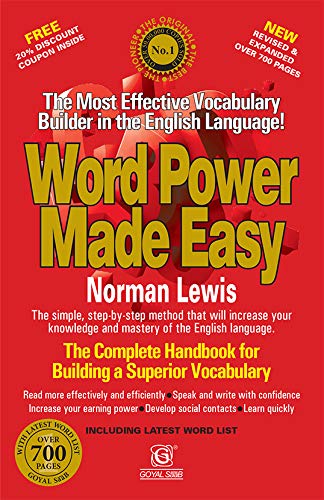 A core book about English language and correct word usage; those who are preparing to sit for CAT, GMAT, GRE, TOEFL and other such examinations would definitely stand to greatly benefit from this book. Anybody who wants to improve one's vocabulary will also find it very useful.

Authored by Norman Lewis, the grammarian from New York who has several other English language books to his credit, 'Word Power Made Easy' has been published by Goyal Publishers and became popular soon after the first edition was released in the year 2009.

For those Indian students who have to clear the Test of English as a Foreign Language (TOEFL), an essential examination for securing admission to many overseas universities, improving vocabulary and knowing about the correct use of similarly spelled words or words pronounced words is most essential .

The book is broadly divided into three sections. By way of simple techniques, the author has presented easy tips for improving one's vocabulary and word skills. After having created awareness about the new words and their meaning, he then goes onto explain how to make their correct usage.

Norman Lewis, by way of citing several examples, even explains the correct usage of many words that often have the user confused. The diction and many idioms are explained in detail. Picking up the correct synonym, when arriving at a particular expression, has also been explained.

A section of the book even explains many etymology concepts that one can easily adopt for getting a better grasp of the language. The book has been divided into oriented sessions that need action from the user and there are many exercises that challenge and enhance one's language skills.

At the end of every chapter ends there is a review exercise. Putting oneself to test for these review exercises will give the user a progressive check about the grasp of the language one is gaining. At many places, the monotony of the chapters has been splintered with trivia that keeps the reader's interest in the subject alive and even encourages one to keep practicing more.

The book is laid out in an easy to understand language but at places does challenge one comprehension of the subject. Since 2009, when this 686 page book was first released, it has only become more popular as the years have gone by.

Not just students who are seeking admission to prestigious foreign universities, this book also has many takers who are working to improve their vocabulary and general hold over the English language. The book is available in paperback.

Born on 30 December, 1912 in Brooklyn, New York, Norman Lewis was an author and grammarian. He was also a lexicographer and etymologist. While he was a student in Columbia University in 1941, he wrote his first book Journeys Through Wordland. Apart from that, he has written many books, namely, 30 Days to Better English, Dictionary of Word Power, Speak Better, Write Better and Rapid Vocabulary Builder, among others.