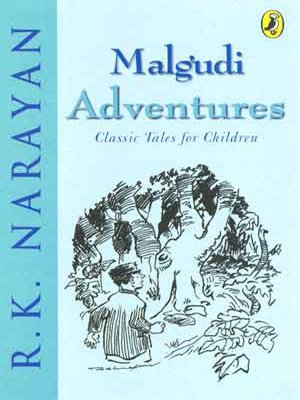 Malgudi Adventures is an amazing book penned by extremely talented author R. K. Narayan. After the tremendous success of Malgudi Schooldays, R. K. Narayan wrote his second master piece. The story is all about the escapades of Swami and his friends in the magical South Indian small town of Malgudi.

The unforgettable story of Babu, who, in trying to set up the lights for his sisters’ Navaratri exhibition, manages to throw the entire household into gloom. The book also tells the tale of A snake charmer boy who grows up with a monkey named Rama as his friend; and of Raju, who decides to turn into a guide when a train station is established at Malgudi. The book also describes the story of Chandran, who has fallen in love with the banks of the Sarayu river and of the hilarious continuation of the events that reveals when Raja the tiger decides to take shelter in the local school. So the story of this book is very interesting and rejuvenating.

So if you are looking for a mind blowing story book for gifting to your little one, this is your ideal choice. You can get this book easily on Amazon India.

R.K. Narayan is one of the most eminent Indian Authors of the twentieth century. Born in 1906, Narayan is awarded by National Prize of the Indian Literary Academy, India’s chief literary honour. He has also penned some marvellous master piece named Mr. Sampath – The Printer of Malgudi, Swami and Friends, waiting for Mahatma and Gods, Demons and Others, these all are published by the University of Chicago Press.

R.K. Narayan is one of the most prominent Indian novelists of the twentieth century. Born in 1906, Narayan was the recipient of the National Prize of the Indian Literary Academy, India’s highest literary honor. His numerous works Mr. Sampath – The Printer of Malgudi, Swami and Friends, Waiting for Mahatma and Gods, Demons and Others, all published by the University of Chicago Press.